Similarity of Greek and Indian culture

There are many similarities among different mythical characters of different epics.Here’s a list of few of the similarities between Indian and Greek mythology.

It is said that Greek explorer Megasthenes took the tale of Lord Krishna from India to Greece, whom he called Heracles. Heracles’ tales then became part of the Greek mythology, with appropriate modifications to fit into Greek environment. Greek God Hercules. If we compare Lord Krishna with Heracles then we find many similarities between the two. There are evidences which prove that Hercules is none other than Lord Krishna.

Both Hindu and Greek mythology are centered on three main Gods that are the designated leaders. Just like we have our Vishnu, Brahma and Shiva, they have Zeus, Hades and Poseidon who respectively rule the heavens, the underworld and the seas. Curiously, Indra, the Hindu king of the Gods, is but a caricature and is often depicted in stories as vengeful and petulant. Zeus, in contrast, is all-powerful and feared by all his subjects.

4. The weapons are the same

Indra is considered the God of rain, and his weapon, the Vajrayudha, is said to be a thunderbolt. Though there is no competing myth in the case of Zeus as to how the weapon came into being, his very voice carries a deep rumble, it is said, and he’s often depicted in art with a live streak of lightning trapped in his closed fist. Poseidon, the second God of the trinity, wields the trident, much like Shiva. Weapon of Murugan and Ares are spears.

In both mythologies, the souls of the deceased are judged according to their actions and sentenced to different places. Souls judged as wicked were sent to the Fields of Punishment in Greek mythology, or Naraka in Hindu mythology where they were punished as befits their crimes. Souls judged as good were sent to the Elysian Fields in Greek mythology, or Svarga in Hindu mythology. The Greeks also had the Asphodel Meadows for those who lived ordinary lives, neither wicked nor heroic, and Tartarus as the ultimate concept of Hell. Hindu scriptures define various planes of existence as lokas among other things.

Ares is the god of war, son of Zeus and Hera. According to Homer he was not in good terms with Zeus and Hera. He was shown as being in humiliating situations. Ares fought for Hector in Trojan War. His weapon is spear. Murugan is the god of war and son of Shiva and Parvati.Murugan got angry at his parents and went away from home after he was humiliated in a game between him and Ganesha. Murugan fought for Banasura against Krishna and Balarama in the fight for Usha of Tezpur. Usha in Sanskrit means dawn. Helen means shining light. Weapon of Murugan is also a spear.

7.Birth of Aphrodite and Laxmi
Aphrodite is said to have born from the bubbles formed in sea when Ouranous’s genitals fell in after he was cut down.Laxmi shares a different premise, but similar birth; she appeared from a disturbance in sea. Both are regarded as goddesses of love and beauty. Funnily enough, Lakshmi’s flower, the Lotus, is also prominently used to represent the Hindu goddess Rati who represents carnal desires, something right up Aphrodite’s lane.

8. Helen of Troy and Draupadi

In Greek mythology, Helen of Troy has always been portrayed as a seductress who eloped with young Paris, forcing her desolate husband to fight the war of Troy to get her back. This war resulted in the burning of the beautiful city. Helen was held accountable for this annihilation. We also hear of Draupadi being accounted for Mahabharata. 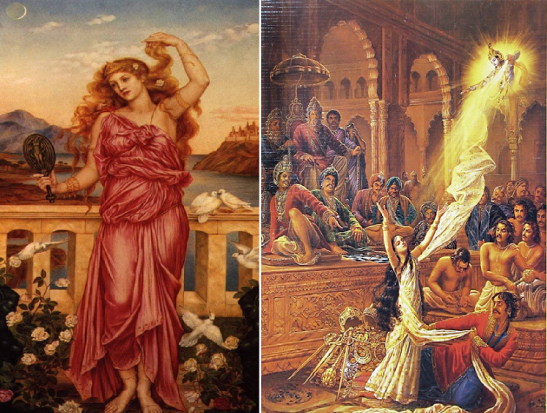 A demigod, Karna was born to Kunti and the Sun god. The unfortunate circumstances of his birth force the virgin Kunti to abandon the baby. He is brought up by a charioteer, Adhiratha, and his wife Radha, who shower their love on him. Born with a gold-plated armour and earrings that would make him invincible, he grows up to be a handsome lad, irresistibly drawn to the kshatriya tradition of warfare, perhaps due to his kshatriya heritage. Achilles leads the Greek army to the gates of victory but falls when a divine arrow shot by Paris, prince of Troy strikes his heel, the only vulnerable part of his body. Both these heroes perhaps fought for honor and glory. Though they have left an indelible mark as legends. They were both the right people in the wrong team.

Atlantis is a legendary island. It is said that after a failed attempt to invade Athens, Atlantis sank into the ocean “in a single day and night of misfortune.” In Hindu Mythology, Dwarka, a city built by Vishwakarma on the order of Lord Krishna is supposed to have suffered a similar fate of submersion into the sea after a war among the Yadavas, the descendants of Lord Krishna.

3 comments on “Similarity of Greek and Indian culture”

This entry was posted on February 18, 2016 by Sanatan Dharm and Hinduism in hinduism in greece, HINDUISM SCIENCE, krishna in greece and tagged greck and indian mythology, similarity of ancient india and greek mythology.