Crop circles could not be explained so far by scientist and they are found all over, like in  but some are created by some  companies like nvidias,to boost their products ,other times it is hard to believe how anybody could have created crop circle in dry lake in Oregan-more than 13 miles Oregan discovered by flight, sri yantra formation, which is no way a advertisement. 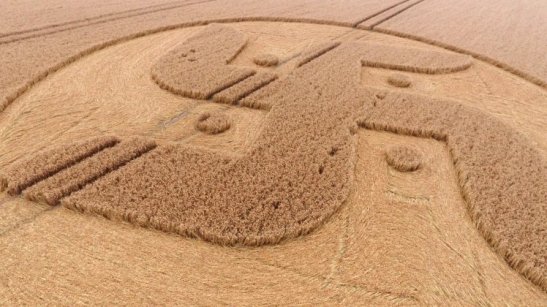 The crop circle in Beckhampton, near Avery, Wiltshire that looks like a nazi swastika. See Masons copy MNCROP: A huge crop circle has been spotted in the English countryside and shockingly appears to be a Nazi SWASTIKA. The symbol, which has been cut into a huge field in Beckhampton, near Avery, Wiltshire, is roughly 150 to 180 ft wide. The formation is so big it can be seen from the nearby road and has been cut into a farmer’s field of wheat or barley, without him giving permission. After first being shocked by the finding, the farmer was instead told how the cutting is actually a Hindu symbol of positivity, and the ancient ‘Swastica’ was used long before the Nazi’s did.

This huge crop circle has emerged in the countryside – and it’s shaped like a giant Swastika.
http://metro.co.uk/video/embed/1324738/6099271
The 180ft wide symbol appeared in a field in Wiltshire and the farmer who owns the land claims he has no idea how it got there.

Appearing overnight, the formation was cut into the barley field at such a size, it can be seen from the road.

The farmer, who was initially shocked (as you would be) upon discovery, said that he has since been told the symbol is Hindu and means ‘positivity’.

Ancient mysteries author Hugh Newman, who recorded the huge formation using a drone, said: ‘The big trouble of the years is who cuts these crop circles because sometimes people don’t have a clue how they ended up there, and the farmer didn’t know.

‘He didn’t say much to me but he was a bit concerned by the symbol and he saw the negative connotation of it when he realised what it looked like.

‘You get teams of hoaxers going around and doing crop circles without anyone’s permission and if they get caught they can be prosecuted for it.