Naga Sadhus! when we hear them, we have wrong idea of naked sadhus with ash in body but they protected Hindu religion many times and they are sacred infantry without payroll to protect their ‘Hindu Dharma’ against Islamic terrorists and then British.Naga Sadhus defended Gokul from the Afghans led by Sardar Khan and many temples for several centuries.

We are not told in history books that Naga Sadhus badly defeated Aurangzeb in Varanasi in 1664.Aurangzeb and his forces had come to plunder Kashi Vishwanath temple and more temples in the region. And the Naga Sadhus defended the temple from the barbaric Mughal plunderers. Aurangzeb did not dare to attack Varanasi again until 1669.

Nagas’s guru was Dattatreya, the incarnation of the Trinity – Brahma, Vishnu, and Mahadev. The Dashanami sampradaya of monastic tradition attributed to Dattatreya was organized into four mutts by Adi Shankaracharya. Besides the mutts, he also organized a section of warrior sadhus to protect Sanatana Dharma. Later they came to be known as Naga Sadhus. They have no fear of death and their weapons have been the trishul, sword, stick. They also carry other weapons including musical instruments and conch shells.

Naga Sadhus were reorganized by Madhusudana Saraswati of Bengal in the 16th century to protect Hindus from tyranny of the Mughals. Madhusudana Saraswati, a philosopher from the Advaita Vedanta tradition, was a contemporary of Akbar. Witnessing attacks of sadhus by Muslims, Madhusudana Saraswati visited Akbar’s court in Agra and complained to him. When his complaint was not addressed, he reorganized the Naga Sadhus and initiated them into action to protect Hindus from atrocities meted out by Muslims. Though many historians do not believe in this theory, few historians justify it to be true. William R. Pinch in his book Soldier Monks and Militant Sadhus has described about its historical basis. Irrespective of the debate on whether this theory is true or not there is evidence that after Madhusudana’s return from Agra, Naga Sadhus assembled in Varanasi and took oath to defend Hindus.

Baba Rampuri in his book Autobiography of a Sadhu: A Journey into Mystic India has given a detailed account about Naga Sadhus and their Akharas. An American born as William A. Gans, he is probably, as he claims, the first Westerner to become a Naga Sadhu after he got answers to his questions on truth from Indian philosophy and culture. At present he is the Shri Mahant at Shri Panch Dashnam Juna Akhara.

Kashi Vishwanath Temple temple is one of the 12 Jyotirlingas and at least as old as Mahabharata era.

Kashi Vishwanath Temple was attacked several times by Islamic plunderers. It was first destroyed by Qutb-ud-din Aibak in 1194 CE. He was then a commander under the army of Mohammad Ghori. The destroyed ruins lay neglected for a few years. Like most other temples, this temple was also rebuilt. The rebuilding was done under the patronage of a Gujarati trader before the mid 13th century. Kashi was plundered again by the the Sharqi rulers of the Jaunpur Sultanate followed by the Muslim army of Sikandar Lodhi in the 15th century. It was rebuilt by Raja Todar Mal in the last part of the 16th century, i.e. in 1585.

Aurangzeb and his Mughal forces attacked Kashi Vishwanath Temple in 1664. The Naga Sadhus resisted and defended the temple. They badly defeated Aurangzeb and his forces. This defeat of the Mughals finds mention in James G. Lochtefeld’s book The Illustrated Encyclopedia of Hinduism, Volume 1.

He described the event as the ‘Battle of Gyan Vapi’ in his book.

Our academic history books find no mention of this victory of the Naga Sadhus against Aurangzeb. Instead, the Mughal ruler has been profusely glorified. Besides no other historians or scholars have ever mentioned about this victory openly in their works. But James G. Lochtefeld has mentioned that historians have inferred the defeated Sultan as Aurangzeb, which means this victory is available in other records but kept hidden so far.

To quote James G. Lochtefeld on the Battle of Gyan Vapi from his book The Illustrated Encyclopedia of Hinduism, Volume 1 (Note that the ‘victory’ of the Naga Sadhus against Aurangzeb and his forces has been termed ‘great’ in this description. So, even if the battle hasn’t been described well, it can be imagined how the Naga Sadhus created havoc on the Mughal army!):

“ Battle reportedly fought in Benares by the Naga ascetic warriors of the Mahanirvani Akhara. According to a handwritten book in the akhara’s archives, in 1664 the akhara’s soldiers won a great victory near the Gyan Vapi well. This document simply states that the Sanyasis were victorious against the forces of “the Sultan,” although historians have inferred that this figure was the Moghul emperor Aurangzeb. If the story is true, this battle may have been a contributing factor in Aurangzeb’s decision to raze the Vishvanath temple in 1669. In light of this claim, it is possible that the temple’s destruction was motivated not simply by intolerant iconoclasm, but by the desire to inflict punishment for resistance and rebellion.” 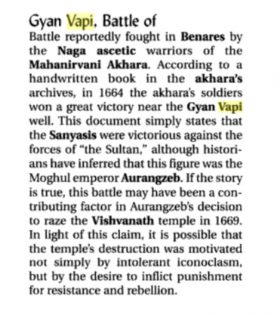 Aurangzeb attacked Varanasi again after four years, i.e. in 1669, and vandalized the temple. He built a mosque in its place called the Gyanvapi mosque. This mosque still exists in the temple premise.

There are very few recorded events of Hindu warriors or local communities offering resistance to save temples and to save the land. It is said the British set on fire and destroyed many such written records, thus destroying evidence of victories and resistance.  Oral history and local historical folklore that have been passed down from one generation to another do have some credibility. For example, the historical folklores of Alha Udal – Bundelkhand warriors defeating Turks, Karnavati of Garhwal defeating Shah Jahan’s forces in Garhwal, Naiki Devi of Gujarat defeating Mohammed Ghori and more valorous events have literary evidences too. When Aurangzeb attacked Varanasi the second time in 1669, Naga Sadhus must have retaliated till their last breath. According to local folklore and oral narrations, around 40,000 Naga Sadhus sacrificed their lives, defending Kashi Vishwanath Jyotirling. And Islamic plunderers have always followed tactics of deceit and treachery in warfare and otherwise.

Maratha king Malhar Rao Holkar strategized to demolish the Gyanvapi mosque and rebuilt the Kashi Vishwanath Temple in 1742, but his plan failed to materialize. The Nawabs of Lucknow intervened. After eight years, i.e. in 1750, the Maharaja of Jaipur planned another strategy to rebuilt the temple after demolishing the mosque. He decided to buy the land where the entire temple and mosque premise was located. But his plan failed too.

In 1780, Ahilyabai Holkar, daughter-in-law of Maratha king Malhar Rao, constructed the present temple structure adjacent to the Gyanvapi mosque. Ahilyabai Holkar also renovated many more temples across the country including the Char Dhams besides taking care of their maintenance. Baiza Bai, widow of the Maratha ruler Daulat Rao Scindhia of Gwalior, further expanded the Kashi Vishwanath temple followed by more expansion in later years under the patronage of more Hindu rulers and traders. The Raja of Nepal gifted a 7-foot high stone statue of Nandi bull to be installed. While Bhosales of Nagpur donated silver, the 1 tonne gold used for plating the dome of the shrine was donated by Maharaja Ranjit Singh. Each time our temples were destroyed, they were rebuilt. This was how faith triumphed over fanaticism.

Salute to the Naga Sadhus for selflessly defending Dharma.

Note: A chapter on the role of Naga Sadhus (numerous episodes of resistance and victory) in defending Dharma (protecting temples and Hindus) will be included in Volume 2 of Saffron Swords (Click Here for Vol 1).

This is modified version of chapter in

My India My Glory