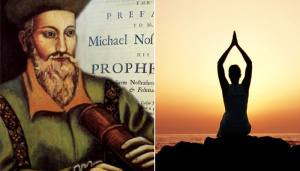 NOSTRADAMUS, the French-Jewish seer who died more than 400 years ago, and the reason for his extraordinary popularity is quite simple. Many predictions published by Nostradamus in 1555 have been completely vindicated by the passage of time. Writing more than 400 years ago, he not only foresaw the two World Wars of the 20th century, but also came close to mentioning Hitler by name! Earlier on, the French Revolution reached elimination in 1792, as predicted by him.

Incredible? Well, it is almost unbelievable. But even the most strident critics have been silenced by the phenomenal accuracy of the French seer. Of the approximately 2,500 forecasts that he published in his poetic “Centuries”, no less than 800 have been precisely fulfilled so far. The remainder covers the period up to the year 3797. The track record of Nostradamus is so perfect that there can be no doubt that the others too will be realized. His “Centuries” are absolutely amazing.

“Long awaited, he will not take birth in Europe,

India will produce the immortal ruler,

Asia will bow before this conquering scholar.”

As if this were not a sufficient warning to fanatics, Nostradamus makes his meaning still more explicit in the following:

“The religion of the name of the seas triumphs,

Against the fanatics of the Khalif’s adalat,

The murderous creed of the false alefs,

Between the Hindus and Christians will be caught.”

This prophecy need a little explication. In geography, one finds the Hindu Maha Sagar (the Indian Ocean in English). Hinduism is the only religion with a sea (an ocean, rather) named after it. The Moslem fanatics believe that the Shariat or Koranic law with its sexual licence is God-given or Khalif’s adalat. The Koran itself opens with the letter alef (A) in Arabic. Both Hindus and Christians have suffered at the hands of Moslems and seek revenge. Lebanon is a foretaste of things to come. The Nostradamian quatrain spells the doom of the creed.

If this interpretation should sound far-fetched, consider yet another prophetic quatrain:

“From the peninsula where three seas meet,

Comes the ruler to whom Thursday is holy,

To oppose him in Asia will be folly.”

South India is the only peninsula in the entire globe where three seas meet a point and stretch away. The great Hindu leader who will wipe out our enemies will hence be a south Indian who offers worship on Thursdays. It is easy to see why Nostradamus specifically mentions Thursday as the holy day. It is only Hindus who consider Thursday sacred. Moslems pray on Friday; Jews bow before God on Saturday; Christians bawl hymns on Sunday at church. Nostradamus is making it clear here that the conqueror will be a Hindu from South India. He will bind Asia together under his rule.

QUOTE: The Hindu leader, however, will not be a tyrant. He will be ruthless with the Moslem fanatics. But he will win over the communists by persuading them of the timeless varieties of Hinduism. Russia will become India’s ally:

“The creed of the Moor will perish,

Followed be another more popular still,

The Dnieper will be the first to relish,

The wisdom which imposes its will.”

The Dnieper is a great river in southern Russia. The seer’s forecast seems to suggest that Russia will be the first among Communist countries to abandon Marxism in favor of Hinduism. The Red comrades in our midst will doubtless throw up their hands in horror at the mere idea. But Riencourt, the French writer, quotes a prophecy made by Ramakrishna Parmahamsa shortly before his death which strongly supports the French seer’s prediction. Shri Ramakrishna declared that his next birth would be to the north-west of India. In other words, he will be reborn in Russia as a Hindu holy man! Communism is certainly a more popular creed than Islam. But both will be alike vanquished by resurgent Hinduism.

This entry was posted on May 9, 2017 by Sanatan Dharm and Hinduism in future prediction, FUTURE TELLING and tagged nostradamus, prediction of future.