Lalitaditya Muktapida! Not many except few have heard about this great king of  Kashmir from the 8th century. He was one of the bravest kings of India who resisted attacks by Arabs. Junaid, the Arab governor of Sindh, attacked Kashmir following the orders of Caliph Hisham. Lalitaditya defeated Junaid and thus the Arab attempt of plundering Kashmir failed. He subjugated the Turks by attacking their territories. He also defeated the Tibetans, who were then very strong. He built the famous Martand Sun temple. This temple is the only surviving structure that speaks volume about this great emperor from Kashmir.

Do you know Lalitaditya Muktapida had one of the biggest empires in world history? But it was short lived. It was more of a military expedition. He was able to subjugate kings of regions ranging from Afghanistan and Punjab, major parts of Haryana and Uttar Pradesh to Bengal, Bihar, and Orissa in the east. In the south, he helped Rashtrakuta queen Ratta also known as Bhavagana, the mother of Dantidurga, with an army to maintain her supremacy from rivals. It was Ratta who sought Lalitaditya’s help, and thus started friendly relations between the two regions of the north and south. In the west, Lalitaditya invaded Kathiawad. In short, his empire was almost twice the size of the Mughal empire, but it didn’t last long. His empire shrinked after his death. He also defeated Momin of Bukhara (Uzbekistan) and subdued the Turks and Tibetans.

Lalitaditya Muktapida was the most powerful of the rulers of the Kartoka dynasty. According to the chronicled account of Kashmiri historian Kalhana’s Rajatarangini, Lalitaditya’s rule lasted for 36 years, 7 months and 11 days. Rajatarangini, which consists of 7826 verses in eight parts (books) in Sanskrit, happens to be the only major source of chronicle of the rulers of Kashmir and its neighbors in the north western parts of India preceding 12th century. Later historians and ethnographers rely on this book for details of Kashmiri kings and their times. Rajatarangini contains a detailed account of Lalitaditya Muktapida, though numerous historians claim much of the chronology and events described as exaggerated. Durlabhvardhana, a contemporary of Raja Harsha of the Vardhana dynasty, founded Kartoka dynasty in 625 CE. Lalitaditya Muktapida, contemporary of Yashovarman, was the fifth Kartoka king and the great grandson of Durlabhvardhana.

He was born as the youngest son to Raja Durlabhaka, who was also known as Pratapaditya and Rani Narendraprabha. Before he ascended the throne of Kashmir, his elder brothers Vajraditya, also known as Chandrapida and Udayaditya, also known as Tarapida, were kings respectively. According to Rajatarangini, Lalitaditya ruled from 700 to 736 CE. Modern historians date his reign to  the period from 724 to 760 CE. The dating may differ by a few years, but events are true.

A German art historian Hermann Goetz from the 20th century has claimed that events described in Rajatarangini by Kalhana about Lalitaditya Muktapida is true. Contemporary historian André Wink supports Goetz’s statement. But Marc Aurel Stein, a Hungarian-born British archaeologist from the later 19th and early 20th centuries, considers few military campaigns of Lalitaditya to be true and few to be false. A professor at several Indian universities, Stein first translated the Rajatarangini into English. 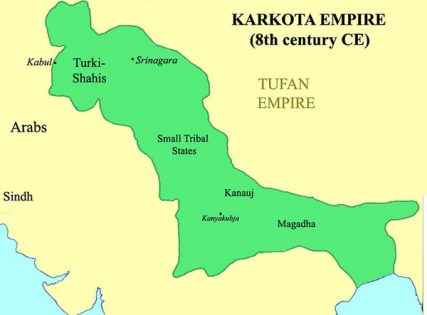 Our focus in this article is not about Lalitaditya’s military expeditions in other kingdoms of Bharat, but his expeditions and victories against foreigners, especially Tibetans, Arab forces, and Turkish Muslims. Indian kings did involve in war against one another for expansion of empire and for supremacy. But they followed rules of Dharma in warfare contrary to what Islamic invaders followed.  Indian kings avoided fighting with an opponent already engaged in a fight with another. They avoided stabbing from behind or hitting below the navel. They took care of the injured at the end of the day. They considered women, prisoners of war, and farmers as sacred. They never pillaged the land or destroyed standing structures in enemy lands. They were merciful if enemies asked for pardon.

But Islamic invaders did the opposite of these very rules of Dharma followed by Hindu kings in warfare. They followed the tactics of treachery, deception and cruelty. They plundered kingdoms, pillaged land, killed the weak and innocent, raped women and took them as slaves, stabbed warriors from behind, destroyed standing structures and temples, and what not! Converting the defeated people to Islam was one of their key strategies. They did this wherever they set their foot in India.

The Kashmir king had a strong army. It was because of his military strength that he was able to subjugate many kings from across the country and in foreign lands. He recruited his soldiers and generals from neigboring kingdoms as well as from foreign lands. Regarding this, P.N.K. Bamzai wrote in his book Culture and Political History of Kashmir, Volume 1 “It seems that his army was mainly recruited from the north and most of his generals, including his com-mander-in-chief, Cankunya, also came from the same region. It appears that due to the decline of the Tang rule, the Kashmir ruler attracted many an adventurer and Lalitaditya was not slow in taking advantage of their experience and martial abilities. For instance, it is clear that Cankunya must have acquired fame as a military commander even before he joined the services of Lalitaditya since he bore the Chinese title of Can-kiun-General.”

According to Goetz, Lalitaditya’s contemporary kingdoms in the region had been weakened by foreign invasions and wars. These regions were mostly parts of Afghanistan, Pakistan, Punjab and beyond where Hindu rulers were being gradually subjugated by Islamic invaders. Lalitaditya Muktapida subjugated Dardistan and Tukharistan. In the words of P.N.K. Bamzai, “We know that Arab invasion was threatening the Kabul valley already from the commencement of the eighth century and that simultaneously the Muhammadan power in Sind was making efforts to advance northwards! While the Sahi rule in Kabul and Gandhara was exposed to these attacks, Lalitaditya may well have found an opportunity to extend his authority in the direction of the Indus. He led a victorious army through the Dard Desha (Dardistan) to the Tukhara country (Tukharistan of the later historians). The whole region was then thoroughly imbued with the Kashmiri traditions and learning, thanks to the efforts of the numerous Kashmiri monks and the Kashmiri settlements in the various Central Asian cities. It cannot therefore be difficult to understand that the Kashmir armies under Lalitaditya gained an easy victory there.”

Junaid, the Arab governor of Sindh, attacked Kashmir following the orders of Caliph Hisham. After the death of Muhammad, four major caliphates were established. Umayyad was the second of the caliphhates; they hailed from Mecca. Hisham was the 10th Umayyad Caliph. The Arabs had established their rule over the Hindu regions of Sindh after Muhammad bin Qasim led an Umayyad force and defeated Raja Dahir in 711. Thereafter, Hindu chiefs rose in rebellion in Sindh. Hisham sent armies to end the Hindu rebellion, and he was successful. The Umayyads reasserted their rule over major portions in Sindh and lower Punjab, which were once ruled by Hindus. Muhammad bin Qasim was also on an expedition of attacking Kashmir. Lalitaditya’s elder brother Chandrapida was then the ruler of Kashmir. Chandrapida sought military aid from the Chinese, but did not receive any help. Fortunately, the Ummayad Caliph called back Qasim to Damascus. Hence, during Lalitaditya’s reign, the Ummayad Caliph sent armies to attack Kashmir again.

Lalitaditya was never satisfied with his conquests and victories. He wanted to subjugate more territories. It was during one of his new expeditions that he lost his life. According to Kalhana, it was a distant expedition on the north that brought his end. There are two versions to the king’s death. According to one version, Lalitaditya perished through excessive snow in Afghanistan. As per another version, he was separated from his army during one of the expeditions. As he was all alone in a difficult mountaineous terrain, he committed suicide to avoid being captured.

Lalitaditya Muktapida is counted among the greatest kings of Kashmir. He not only protected his subjects but also patronized art and crafts and different branches of learning. He looked after the welfare of his subjects. He was the first Kashmiri king to clear the bed of the Baramula river of rocks and silt to control recurring floods. Swamps and other uncultivated lands were reclaimed for purposes of cultivation. He facilitated irrigation. Kashmir thus prospered under him though he went on regular military expeditions. According to Kalhana, Parihasapura city became Lalitaditya’s residence for a brief period, while Srinagara continued to serve as the other capital.

The Kashmir king also built several other temples and learning centres in Kashmir. But these could not stand destruction by Islamic invaders and the ravages of time. Under the orders of Sikandar Butshikan, Martand temple was destroyed completely. Such was the grandeur and strength of the temple that it took two years for Butshikan’s men to destroy it! Sadly this 1300 plus year old temple is still in ruins today! 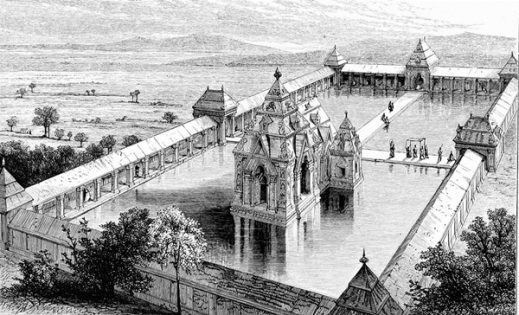 Salute to Lalitaditya Muktapida, the forgotten king of Kashmir!

3. Studies in the History and Art of Kashmir and the Indian Himalaya, Hermann Goetz

4. Al-Hind, the Making of the Indo-Islamic World: Early Medieval India and the Expansion of Islam 7th-11th Centuries, André Wink

5. Foundation of the Sultanate, Sodhgang