How Avanijanashraya Pulakeshin of Gujarat Defeated Arabs in 737 CE

Avanijanashraya Pulakeshin! Except in Gujarat and few parts of South India, the name of this brave son of Bharat Mata is in oblivion. Like hundreds and thousands of our valorous ancestors from the east to west, north to south, who don’t find a place in History books, his name is unsung. He is one of the earliest feudatory chiefs from Gujarat, who bravely repulsed attacks by Arabs. He defeated the Arabs in a fierce battle near Navsari in around 737 CE.

Think about Gujarat. The region’s ancient settlements are corroborated by archaeological evidences confirming existence of a prosperous city dating back to 4000-6000 years. This was Krishna’s Dwarka. Besides, there are numerous archaeological substantiations of Stone Age settlements in this region. And who isn’t familiar with the Indus Valley excavations in this area. Ancient ports here served as national and international trading centres. Nandas, Mauryas, Satavahanas, Guptas followed by Maitrakas, Gurjar Pratiharas, Rashtrakutas, Palas, and Solanki Chalukyas ruled the region. Islamic rule and settlements followed after this.

Vassals of the Chalukyas of Vatapi ruled parts of Gujarat with capital at Navasarika (modern Navsari) during 7th and 8th centuries. These kingdoms in southern Gujarat were subdued by a force sent by Chalukyan king. Numerous Chalukyan records and inscriptions find mention of this conquest. But these records find no mention of the defeated king. It was after the North Indian region relapsed into political instability immediately after Harsha’s death that led to attacks by powerful rulers. The early Chalukyas of Gujarat are different from the later Solanki Chalukyas.

Durga Prasad Dikshit’s Political History of the Chālukyas of Badami finds mention of the Chalukya conquests and inscriptions, “Vinayaditya also appears to have made an attempt to invade Northern India. The inscriptions belonging to the reigns of Vijayaditya, Vikramaditya II and Kirttivarman II refer to his victory over a ruler of all the regions of Uttarapatha, i.e., Northern India.”…. The earliest inscription which speaks of this conquest of Vinayaditya is the Kasar-Sirasi Plates dated in the Saka year 619 falling in the 1st regnal year of Vijayaditya, son of Vinayaditya. …. Several Chalukyan records confirm Vinayaditya’s conquest of North India and the defeat of an unnamed paramount ruler.”

Dharashraya Jayasimhavarman, brother of Vatapi Chalukyan king Vikramaditya I, was appointed governor of parts of the southern Gujarat region including other regions subjugated by the Chalukyas. He was succeeded by Jayashraya Mangalarasa followed by Avanijanashraya Pulakeshin. There is inscriptional evidence of all the three rulers. But there are no records of what happened to the early Chalukyas after the three rulers. Avanijanashraya Pulakeshin ascended the throne in 731 CE.

Evidence about Avanijanashraya Pulakeshin’s reign in Gujarat is attested by a Sanskrit inscription, termed the Navsari inscription. This inscription was found by a resident of Satem village in Navsari; he gave it to the Epigraphical Society of India.  The inscription is dated year 490 of the Kalachuri era corresponding to 1 November 738 of the Gregorian calendar. Another estimated date is 21 October 739 CE.

Prior to and during the reign of Avanijanashraya Pulakeshin, the Umayyad Caliphate emerged powerful in the Arabian region. After the death of Muhammad, four major caliphates were established. Umayyad was the second of the caliphhates; they hailed from Mecca. Also termed Tajikas, another connotation for Arabs, they plundered few kingdoms of Akhand Bharat, especially Sindh and advanced inwards. Their empire stretched from Spain in the west to Afghanistan and Pakistan in the east.

The Arabs heard a lot about the wealth of India. They were determined to expand their empire in the Indian regions. They advanced up to Navsari. In a fierce battle that followed, Avanijanashraya Pulakeshin badly defeated the Arabs. This fierce battle about Avanijanashraya Pulakeshin defeating the Arabs is described in the Navsari inscription.  Going by the inscription of Navsari, the battle between the Chalukyas and Arabs might have taken place in 737 or 738 CE.

To quote Durga Prasad Dikshit from his book about description of the battle and victory evidenced by the Navsari inscription, “This record vividly describes the Arab invasion and the fierce fight that took place at Naysari. Further, it refers to the Mika army (Arab forces), which had plundered the Saindhavas (Sindhu kingdom), Kachchhelas (Cutch), Saurashtra (Kathiawada), Chavolakas…. Avanijanalraya Pulakegiraja gave him a fierce fight somewhere near his headquarters in which he emerged victorious.” 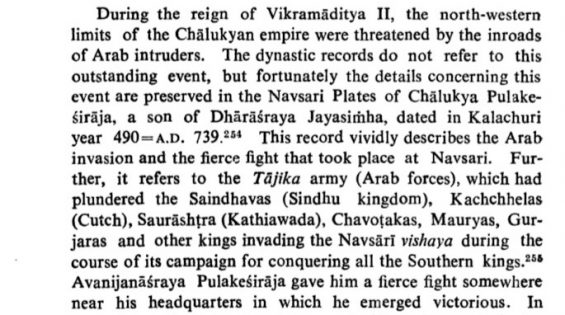 Excerpts about the victory of the battle from Durga Prasad Dikshit’s book ‘Political History of the Chālukyas of Badami’.

In recognition of this victory in battle against the Arabs, the then Chalukyan king of Vatapi, Vikramaditya II, bestowed upon Avanijanashraya Pulakeshin the following titles. (The inscription mentions Vikramaditya II as Vallabha Narendra):

3. ‘Prithivivallabha’ connoting ‘beloved of the earth’

The Arabs made several attempts to conquer India. It was a stiff resistance offered by individual rulers as well as unity of Indian rulers from north and south that helped in checking their advances and driving them out of the Indian soil. Junaid, the Arab governor of Sindh, attacked Kashmir following the orders of Caliph Hisham. Lalitaditya Muktapida, the then king of Kashmir, defeated Junaid and thus the Arab attempt of plundering Kashmir failed. A confederacy of North Indian and South Indian rulers under the leadership of Nagbhat I, the Gurjar Partihar king badly defeated the Arab forces in Rajasthan during the 8th century. Had the stiff resistances not been offered, India would have been under Islamic rule from the 8th century!

2. Political History of the Chālukyas of Badami, Durga Prasad Dikshit.