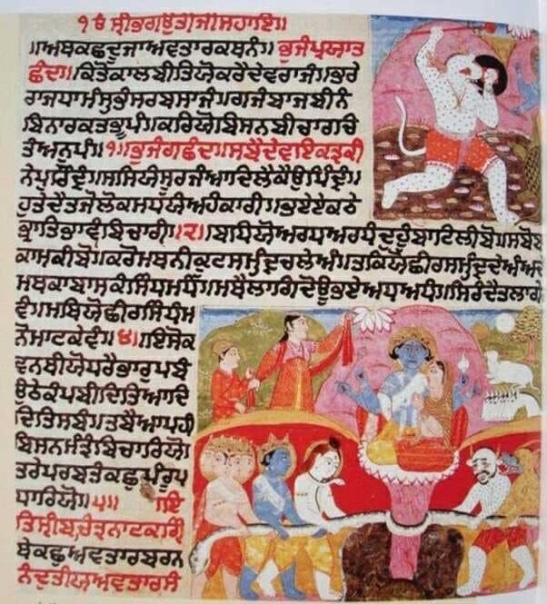 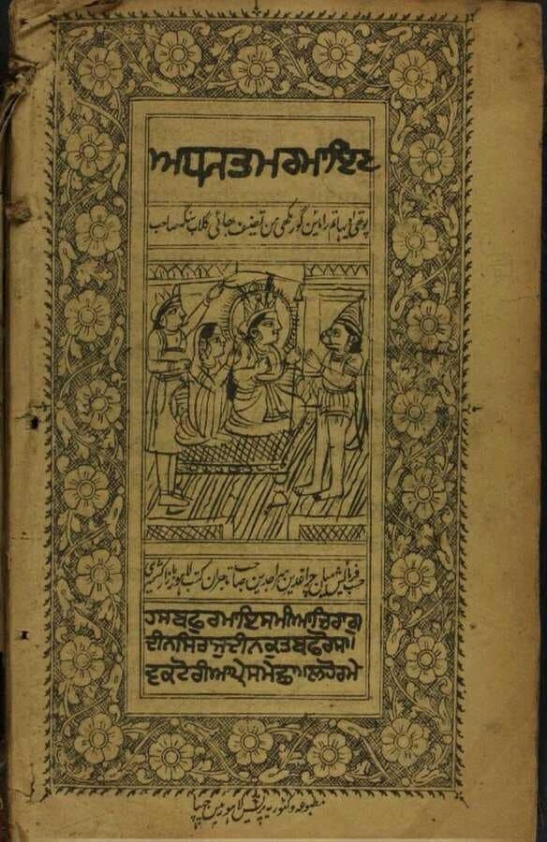 2. An stone lithographed copy of Adhyatam Ramayan printed in Lahore 1903.

All the Ten Sikh Gurus were the descendents of Raja Dasrath.

The ancestors of Guru Nanak and the succeeding Nine Gurus were the Kashtriyas of the Solar Dynasty, Kings Raghu, Aj, Dashrat, and Sri Ram Chander and their descendants, who were the rulers of North western part of India. A section of the descendents of this dynasty became the great scholars of religion and became the exponents of the Vedas. From these scholarly traditions , which were maintained in this clan, they came to be known as Baidis, Trehans, Bhallas and Sodhis It was in Baidi clan, Guru Nanak was born in 1469 C.E. , Guru Angad Dev in Trehan clan, Guru Amar Das in Bhalla clan, and Guru Ram Das in Sodhi clan; the six remaining Gurus, from 5th to 10th Gurus, were the descendants of Sri Guru Ram Das Sodhi. Guru Gobind Singh has described the origin of Baidi and Sodhi clans in Bichitar Natak, Chapter 2

King Aj bestowed his empire and throne on Dasrath, who also became the great archer. He married three wives, the first son was Ram Chander, the second, Bharat, the third Lachhmn, and the fourth Shatrughan. They ruled for a long time. Ram Chander married Sita. From this union two sons were born, Lav and Kush. Sita’s sons, Lav and Kush, both became kings. Two cities were raised in Punjab, one by Lav, Lahore, and the other by Kush, Kasur. Both became very famous. Kush and lav reigned for a long time. Their sons and grandsons also became rulers. It is mentioned that Kush’s descendent, Kalket and Lav’s decendent, Kalrai had innumerable sons. Kalket possessed peerless strength, and expelled Kalrai from the city of Lahore. He fled to Sanaudh country (south of Delhi), where he married the king’s daughter. The son born in his house of that marriage was named Sodhi Rai. The Sodhi clan began from that time The sons and grandsons, who sprung from Sodhi Rai, were all called Sodhis; the Almighty Lord extended the clan further. They became very distinguished among men and their wealth increased day by day. They exercised independent sway and conquered the kings of many countries. . They spread religion every where, caused umbrellas to wave over their heads. Sodi Rai, who had become a king, had two sons, named Jagat Rai and Prithvi Rai. Appointing Prithvi Rai as Raja, Sodhi Rai took his elder son Jagat Rai and made invasion of Lahore. They remembered the old enmity and wished to avenge themselves by retaking Lahore. They took Lahore after a bloody battle. The serviving members of the Kush family fled to kanshi (Banaras). There they expounded the Vedas and became the readers of Vedas. Those of the expelled descendents of Kush, who read the Vedas were called Baidies. They carefully attended to their religious duties. Their fame reached their cousin brothers, the Sodhis, ruling in Lahore. The king of Lahore dispatched Baidies a conciliatory letter, to forget enmity that prevailed among them. The king’s messenger arrived in Banaras , and explained the contents of the missive to all the Baidies. Upon this all the readers of the Vedas proceeded to Punjab. And on their arrival made obeisance to the King. He caused them to recite the Vedas. While all his brethern were seated near him in assembly, the Baidi chief recited Sam Ved, the Yujar Ved, then the Rig Ved, making gesticulations with their hands, and finally the Atharav Ved. The King was pleased and gave them all the possessions. He elected to live in a forest. On giving them his kingdom he assumed the garb of a Rishi. The people tried to restrain him, but he dismissed all regret, and absorbed himself in God’s Love.

The Baidi Chief was pleased on obtaining the kingdom and in the joy of his heart blessed the Sodhi King, saying: “When I will come in the Kal Age under the name of Nanak, I will make you worthy of worship in the world, and you shall attain the highest dignity. After hearing the first three Vedas from us you got totally absorbed in love of God, and on hearing the fourth Veda you have given your kingdom. After having assumed three births (in Kal Age), in my fourth I will make you the Guru.” (Verse 9, Chapter 4).

Baidis were pleased on getting the kingdom. Afterwards again quarrels increased in the Baidi Clan, which no one could adjust. It was the Will of God that sovereignty should pass from their family. Only 20 villages remained to the Baidis, which they began to till. A long time passed in that way until the epoch for the birth of Nanak arrived. Nanak Rai, born in the line of those Baidis, conferred happiness on all his disciples, and assisted them in this world and the next. He established truth in the Kal Age, and showed the way unto all holy men. Sin never touches those, who follow in his footsteps. God removes all sufferings and sins from those who embrace the religion. Pain and hunger never annoy them and they never fall into death’s noose. Nanak assumed the body of Angad. Afterwards Nanak was called Amar Das, as one lamp is lit from another. When the time of fulfillment of the blessing came, then Ram Das Sodhi became the Guru. Amar Das gave him the Guruship according to the ancient blessing. All the succeeding six Gurus after Guru Ram Das Sodhi, were his descendents. The Guruship was passed from Guru Ram Das to his youngest son, Guru Arjan and in this way reached Guru Guru Gobind Singh, who passed on to the Khalsa Perople in Collectve Form till Eternity.

From the above account we learn that Guru Nanak and Guru Ram Das and the latter’s decendent Gurus were the descendents of Lord Ram Chander’s two sons, KUSH and LAV respectively, BAIDI AND SODHI CLANS.

Guru Angad Dev was Trehan, a descendent of Lachhman, brother to Lord Ram Chander and Guru Amar Das was Bhalla, a descendent of Bharat, brother to Ram Chander. As such all the Ten Gurus were the descendents of Raja Dasrath, and belonged to this Dynasty, which is also known as Raghu Vansh or SURAJ BUNSE or SUN DYNASTY. At page 1401, SGGS, in Swaiyyas of Praise of Guru Ram Das, Bhatt Gayund states, “Raghubuns tilak sunder Dasrath ghar mun buncheh ja ki sarnung.” (“Guru Ram Das, was like handsome Sri Ram Chander in the house of Dasrath of Raghu Dynasty; whose Sanctuary the sages seek.”).

Some other references of Ramayana :

The story of Ram remain immortal throughout the ages and is loved by everyone.

Ramayan (the story of Ram) is ever firm (in the mind of people) and whosoever seeks shelter (in it) goes across (the world ocean).

Ramayan spread far and wide as the story establishing Ram-Rajya, a virtuous kingdom.

Through the Ramayan people came to know that the stone (Ahalya) was restored to life by the touch of the feet of Ram.

There are three versions of Ramayan in Sikh tradition:

An adaptation from Ramayan and is a part of Chobis Avatar. This is clear from a line in Dasam Granth:

BENIGN END OF THE RAMAYANA CHAPTER.

It is recited in Hazur Sahib during Dusshera.

It is Gurmukhi version of Sanskrit Adhyatam Ramayan which discusses Ramayan in spiritual context.

Balmik Ramayan is a book written by Bhai Santokh Singh in about 1834. Bhai Santokh Singh first translated Amar Kosh, a Granth in Sanskrit into Braj language (versified Hindi) and called this Naam Kosh in 1821. On the insistence of Raja Udai Singh of Kaithal, he also translated Balmik Ramayan, the epic Hindu text into a versified Hindi (Braj Bhasha) also called Braj Bhakha, or Dehaati Zabaan (country tongue) in 1834. This discusses historical aspect.

My Sovereign Lord King is Raam Chandra,the Son of the King Dasrat’h; prays Naam Dayv,I drink in the Ambrosial Nectar. ||4||4||

Due to some reason, Lord, the cause of all the causes assumed the form of Ramchandra.

Ram was a spotless person and due to his sense of dharma (responsibility), even the stones floated in ocean.

You are the Great Raam Chand, who ultimately has no form or feature.

2 comments on “Sikh guru were descendants of King Dasrath”