Whole world was Hindu until 2000 yrs ago when christian started cult of religion game and second son of Abraham keeping tradition ongoing.

Mexico was inhabited by the Aztecs before the Spanish occupation.

The term Aztec might have its roots in Astika, meaning one who believes in the Authority of the Vedas.

A festival is celebrated at the same time as our Navaratri; it is called “Rama-Sita”

The Mexican national throne preserved in the National Museum of Mexico bears the typical Hindu Buddhist disc of the Sun.

The Mexicans also had the Hindu Simhasan (Lion throne). 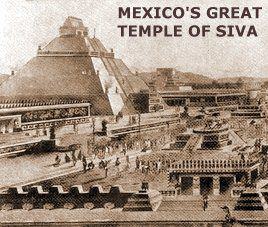 ‘  Temple of Shiva was found in Mexico city.

The largest temple in Mexico City was the temple of Lord Shiva, the War God of the Mexican whom the Spanish invaders found entwined by golden snakes. This temple was built in the 15th century and had 3000 Deva-Dasis to perform religious ceremonials. The Mexican temple had the Gopuram style. Here you see a reconstruction of the…

One comment on “Navaratri Is Rama Sita Festival,Shiva In Mexico”

This entry was posted on January 28, 2015 by Sanatan Dharm and Hinduism in HINDUISM SCIENCE.