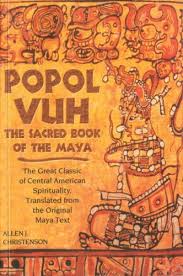 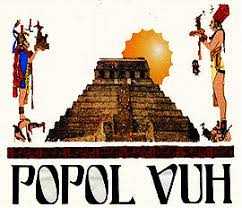 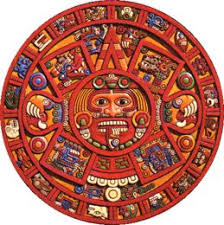 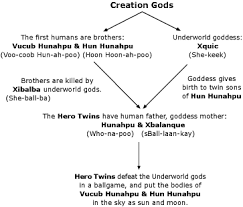 Popol Vuh -narrative about the origins, traditions and history of the

In Chichicastenango around l7OO, a priest, Francisco Ximenez copied the manuscript, adding a Spanish translation.

Now there are several (perhaps many) translations of the Popol Vuh, popol vuh including Goetz and

translation which reproduces typescript of the original Quiché(K’iche’), Dennis Tedlock’s

translation done with the help of a Quiche shaman (which is nicely annotated and footnoted,

but which lacks any reproduction of the Quiché.A Native speaker of K’iche’ ( Chavez) has

also provided a translation into Spanish, and Allen Christenson has perhaps the most recent

Part IPart I of Popol Vuh consists of two stories.

who will adore, obey, and sustain them (three chapters).

destroy an arrogant celestial being, Vucub-Caquix, and his two sons,

Zipacna and Cabracan, who refused to adore, obey, and sustain their creators.

The first story of Part I opens with a description of what it was like before the first creation began.

“All was empty…, all was in silence…, all was motionless…there was only the sky and the sea”.

In the sea, surrounded with light, hidden under green feathers, was

Gucumatz.In the sky was “the Heart of Heaven, or God- as he is called.”

All was in suspense

Then came the word, like a lightning bolt it ripped through the sky,

penetrated the waters, and fertilized the minds of the Earth-Water

Then the creator couple said “let it be done”, and it was done: The

earth emerged from the sea; plants put forth shoots; wild animals came to be.

And then the Gods made three frustrated attempts to create humankind; first out of animals,

then out of mud, and finally out of wood. The Wood men were killed off too,

however, and their descendants are today’s monkeys.

The second story opens with a vain Lucifer figure named Vucub-Caquix, who had two sons;

Zipacna and Cabracan, both of whom made the earth shake as they burrowed under mountains.

The Hero Twins (Hunahpu and Xbalanque), out hunting, shoot Vucub Caquix in the jaw

with a blowgun, while he is in a tree eating fruit.Angered, Vucub Caquix tears off Hunahpu’s arm.

To recover the arm, the twins pose as dentists, go to Vucub Caquix’ house, and dupe himinto

letting them pull his teeth and replace them with white corn kernels (while they retrieve the arm).

With his new corn dentures, Vucub Caquix no longer looked like a lord, so he died in poverty.

Then the Hero Twins set out to kill Zipacna.(( Zipacna had himself just finished killing”the 4OO

young men”.He had feigned death when the four hundred young men tried to do him in by having

him dig a hole in the ground so that they could plant a pole on him, but he escaped, and while they

were celebrating his death, they were then crushed by Zipacna, becoming stars in the

sky.))The Hero Twins made a crab to lure Zipacna, who found the crab and was killed in its

Next, the Hero Twins poisoned a bird with white earth, and when Cabracan ate the bird, he died.

sons ofXpiyacoc and Xmucane (the diviners), one of whom (Hun Hunahpu) is the father of the hero

(we find out later that Hun Hunahpu and another woman, Xquic[“Ms. Blood”]

are the parents of the Hero Twins)

ballgame with his sons, the “Monkey Twins” (Hun Batz’ and Hun Chouen).

One day the noise of their ballgame annoyed the Lords of Hell (Xibalba), who

summoned the Hunahpu brothers to come and play ball.

The Hunahpu brothers came down to Hell, and after a series of tortures

they were sacrificed and buried.

On the spot where the brothers were buried, a tree sprang up,

loaded with skulls for fruit, and among the fruit was the head of Hunahpu, in skull form.

Along came Xquic, daughter of one of the Lords of Hell.She reached up

to pick one of the fruits, and the skull of Hun Hunahpu spat in her hand.

This made her pregnant with the Hero Twins.

When her pregnancy was noticed, her father ordered four messengers to

take her out into the woods and sacrifice her and bring back her heart for burning.

Xquic talked the messengers into letting her live, so they brought back a false heart in a gourd.

Xquic went up to earth to the home of her new “mother-in-law, Xmucane, where she gave

birth to the Hero Twins

The Monkey Brothers, half brothers of the Hero Twins (having the same

father, Hun Hunahpu) envied the Hero Twins, and tried to kill them with

ants and with thistles.But the Hero Twins survived beingplaced on an anthill,

and also being placed on thistles while still infants.

The Hero twins, once grown, tricked their Monkey half-brothers into

climbing a tree, where they turned into monkeys while the tree grew

The next scene deals with the Hero Twins as cultivators of maize.

In spite of their efforts at clearing the fields during the day, their work was undone

at night by wild animals including rat, rabbit, and deer, telling the plants, “rise up trees,

They catch the rat (and the other animals) in the act one night,

and the rat tells them where their father’s ball playing gear is.

so the Lords of Hell summon the Hero Twins. The message is

and the snake by a hawk, which is then shot down by the Twins’

When the Twins cure the hawk it vomits the snake, which vomits the

toad, which ejects the louse, which tells the message.

lords of Hell, and that is how the Hero Twins learned their names,

call the assembled lords of Xibalba by their real names).

tests, putting them in various “houses”: (between Houses, the twins play ball

with the Lords of Hell, always winning or tying with them)

smoke a cigar. They succeed with the help of fireflies.

House of Knives – twins sent to gather flowers in the house ofknives.

They escape being cut to pieces with the help of ants.

House of Fire -as with the previous ones, the Twins survived.

House of Bats – twins slept inside theirblowguns and were not

bitten until along came Camazotz (Death Bat) from the sky, and when Hunahpu

poked his head out Camazotz cut off his head.

During the ball game the next day, Xbalanque, through trickery, got

Hunahpu’s head head back onto his body.

Then in the final story of PART II,the Lords of Hell set up a contest where the

The Twins deliberately jump into the fire and die.

Shortly afterwards they arise miraculously and re-appear as old men.

They present themselves disguised first as dancers, then as

magicians.They kill a dog and restore it to life, then they

kill themselves and are resurrected.

Seeing this, the envious Lords of Hell ask to be sacrificed and

brought back to life.The twins sacrifice them, but don’t

restore them to life.

to become the sun and the moon..

PART III -It is time for humans to appear on the earth.

In part III is the beginning of when the first true humans appeared.The first

four men (called in the Popol Vuh the four fathers, who were also

the Quiche forefathers) were made this time from corn dough.

what was close, thus checking their desires to become gods.

Then the first four women were created as wives for the first 4 men.

They all spoke the same language.And they went to Tulan-Zuiva

(city of the seven caves) where they received their god, Tohil.

They had no fire, and by this time they could no longer understand

one another.Tohil gave them fire, and in return he wanted more

than just their blood.

At first Tohil wanted only men’s blood, that is, before the Quiche

came to Tulan.”Bleed your ears, prick your elbows;

this will be your thanks toGod.”

Later, after he had given them fire, he demanded their hearts

(“their waist and their armpits”) also.Symbolic wounding was

not enough.Death was the perfect offering.

Tohil was the Quiche god, and he had to be hidden from the Quiche’s

enemies, who were pressing in from all sides.The Quiche nation

held together, but Tohil had turned to stone, and the priests and

sacrificers had to use trickery so that the people would not know.

His image would appear to speak and to command.

PART IVPart Four describes the total victory of Tohil, who operated upon the Lords of the

Earth through the instrumentality of the priests and sacrificers.His dominion, however, was the

reason for the destruction of the Quiche.

The story begins with the priests and sacrificers who began the abduction of the men of the tribes,

and who went to sacrifice them before Tohil.The tribes became aware of this and tried to overcome

Tohil by various ruses and temptations, but failed.

The Quiche founded the city of Gumarcah, and here Gucumatz

(the feathered serpent), a most magnificent Lord, raised the Quiche

Mayans to their greatest peak of power.

Gucumatz could foresee things, and could change himself into different animals.

Among other things he instituted an elaborate ritual of fasting and

the Quiche “who finally came to an end”.