HOW CHRISTIANITY WAS INVENTED: THE TRUTH! 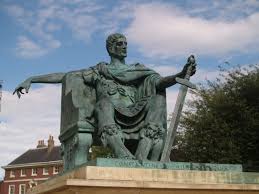 Christianity is a copycat religion created by Emperor Constantine (for political purposes). (Incidentally, Constantine murdered his wife and his son, and later,  the Church made him a Saint.)

Saint Constantine’s  copycat religion was based upon a myth (The Persian savior god Mithra, crucified 600 B.C. ?  400 B.C.?), which was based on other similar myths, all the way back to Chrishna of India (a mythical god that some claim was “crucified” around 1200 B.C.). There were 16 mythical crucifixions before Christ. The belief in the crucifixion of Gods was prevalent in various oriental or heathen countries long prior to the reported crucifixion of Christ.  Of the 16 crucifixions, most were born of a virgin and about half of them on December 25th.

At Amazon.com, take a look at the book “Beyond All Religion-Beyond religious SCRIPTURES and practices…

This entry was posted on October 10, 2015 by Sanatan Dharm and Hinduism in HINDUISM SCIENCE.