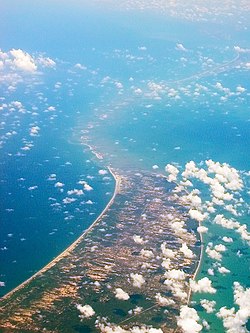 Adam’s bridge as seen from the air

— The NASA Shuttle has imaged a mysterious ancient bridge between India and Sri Lanka…, as mentioned in the Ramayana.

The evidence, say experts matter-of-factly, is in the Digital Image Collection.

The recently discovered bridge, currently named as Adam’s Bridge and made of a chain of shoals, 30 km long, in the Palk Straits between India and Sri Lanka, reveals a mystery behind it.

The bridge’s unique curvature and composition by age reveals that it is man-made. Legend as well as Archeological studies reveal that the first signs of human inhabitants in Sri Lanka date back to the primitive age, about 1,750,000 years ago and the bridge’s age is also almost equivalent.

Space images taken by NASA reveal a mysterious ancient bridge in the Palk Strait between India and Sri Lanka. The recently discovered bridge currently named as Adam&laqno;s Bridge is made of chain of shoals, c.18 mi (30 km) long.

The bridge&laqno;s unique curvature and composition by age reveals that it is man made. The legends as well as Archeological studies reveal that the first signs of human inhabitants in Sri Lanka date back to the a primitive age, about 1,750,000 years ago and the bridge&laqno;s age is also almost equivalent.

This information is a crucial aspect for an insight into the mysterious legend called Ramayana, which was supposed to have taken place in tredha yuga (more than 1,700,000 years ago).

In a programme called “Project Rameswaram”, the Geological Survey of India (GSI) concluded through the dating of corals that Rameswaram Island evolved beginning 125,000 years ago. Radiocarbon dating of samples in this study suggests that the domain between Rameswaram and Talaimannar may have been exposed sometime between 7,000 and 18,000 years ago.[25] Thermoluminescence dating by GSI concludes that the sand dunes between Dhanushkodi and Adam’s Bridge started forming about 500–600 years ago.[25]

Investigation by the Centre for Remote Sensing (CRS) of Bharathidasan University, Tiruchi, led by Professor S.M. Ramasamy dates the structure to 3,500 years.[31] In the same study, carbon dating of some ancient beaches between Thiruthuraipoondi and Kodiyakarai shows the Thiruthuraipoondi beach dates back to 6,000 years and Kodiyakarai around 1,100 years ago. Another study suggests that the appearance of the reefs and other evidence indicate their recency, and a coral sample gives a radiocarbon age of 4,020±160 years BP

In this epic, there is a mentioning about a bridge, which was built between Rameshwaram (India) and Srilankan coast under the supervision of a dynamic and invincible figure called Rama who is supposed to be the incarnation of the supreme.

This information may not be of much importance to the archeologists who are interested in exploring the origins of man, but it is sure to open the spiritual gates of the people of the world to have come to know an ancient history linked to the Indian mythology.