The evolution of numerals can be traced from Sarasvati (or Indus) numerals to Brahmi to modern international. Brahmi was used in India over 2000 years ago. What is called “HIndu” in the table refers to the standard Indian numerals after the symbol for zero came to be commonly used. The derivation of Brahmi numerals from the 4500 year old Sarasvati numerals is sketched in the paper by renowned Mr Subhas Kak at Department of Electronics Louisiana Stae University Baton Rouge, LA,

It is one of the most influential writing systems; all modern Indian scripts and several hundred scripts found in Southeast and East Asia are derived from Brahmi.

Rather than representing individual consonant (C) and vowel (V) sounds, its basic writing units represent syllables of various kinds (e.g. CV, CCV, CCCV, CVC, VC). Scripts which operate on this basis are normally classified as syllabic, but because the V and C component of Brahmi symbols are clearly distinguishable, it is classified as an alpha-syllabic writing system. 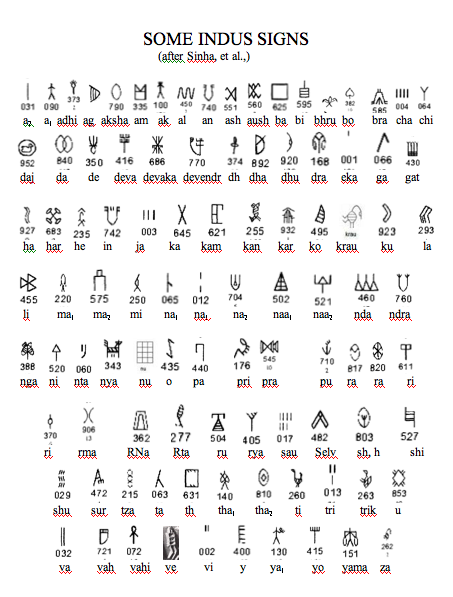 The Brahmi writing system is the modern name given to the oldest script used in India, during the final centuries BCE and the early centuries CE. Like its contemporary in what is now Afghanistan and Pakistan, Kharosthi, Brahmi was an abugida.

The best-known Brahmi inscriptions are the rock-cut edicts of Ashoka in north-central India, dated to the 3rd century BCE. Inscriptions in Tamil-Brahmi, a Southern Brahmic alphabet found on pottery in South India and Sri Lanka, may even predate the Ashoka edicts.

The Gupta script of the 5th century is sometimes called “Late Brahmi”. From the 6th century onward, the Brahmi script diversified into numerous local variants, grouped as the Brahmic family of scripts.

The script was deciphered in 1837 by James Prinsep, an archaeologist, philologist, and official of the British East India Company.
Scholars, such as F. Raymond Allchin, take Brahmi as a purely indigenous development, perhaps with the Bronze Age Indus script as its predecessor.

G. R. Hunter in his book “The Script of Harappa and Mohenjodaro and Its Connection with Other Scripts (1934) details out the derivation of the Brahmi alphabets from the Indus Script, the match being considerably higher than that of Aramaic. Even though there is a lack of intervening evidence for writing during the millennium and a half between the collapse of the Indus Valley Civilization ca. 1900 BCE and the first appearance of Brahmi in the mid-4th century BCE, the Indus hypothesis is slowly gaining momentum because of the sheer differences between how Semitic alphabets work and how Brahmi works for an Indo-Aryan language.

While the contemporary and perhaps somewhat older Kharosthi script is speculated to be a derivation of the Aramaic script, the genesis of the Brahmi script is less straightforward. An origin in the Imperial Aramaic script has nevertheless been proposed by most scholars since the publications by Albrecht Weber (1856) and Georg Buhler’s On the origin of the Indian Brahma alphabet (1895).

Like Kharosthi, Brahmi was used to write the early dialects of Prakrit. Surviving records of the script are mostly restricted to inscriptions on buildings and graves as well as liturgical texts. Sanskrit was not written until many centuries later, and as a result, Brahmi is not a perfect match for Sanskrit; several Sanskrit sounds cannot be written in Brahmi.

DEVELOPMENT OF THE BRAHMI SCRIPT

Most examples of Brahmi found in North and Central India represent Prakrit language. The Ashokan Inscriptions already show some slight regional variations on the Brahmi script. In South India, particularly in Tamil-Nadu, Brahmi inscriptions represent Tamil, a language belonging to the Dravidian language family, with no linguistic affiliation to the Indo-Aryan languages such as Sanskrit or Prakrit.

Some Tamil examples come from inscribed potsherds found at Uraiyur (South India) dating to the 1st century BCE or the 1st century CE. In Arikamedu (South India) there is also evidence of an early form of Tamil in Brahmi inscriptions, dated to the early centuries CE. At this stage, different Brahmi characters specially adapted to suit Tamil phonetic were already in use. Examples of Tamil have not been identified among the earliest securely dated examples of Brahmi found at Anuradhapura in Sri Lanka, where the language represented is Prakrit.

By the 2nd century BCE, the Brahmi script becomes more popular with variations.

Dr D.P Sharma (Harappan archaeologist and director, Bharat Kala Bhawan, Banaras Hindu University (BHU)) further strengthens his argument by quoting the DNA analysis carried out by Dr Lalji Singh, vice-chancellor, BHU. According to Sharma, the analysis by Singh suggests that the two ancient races Aryan and Dravidians were native of India and none of them came outside of our country. The Aryan and Dravidian races in India have the same genetic basis. This suggests that proto Dravidian and proto Aryan races were present in Harappan population and Harappan were using proto Dravidian and Sanskrit as their language and their script was proto Brahmi only.

According to Sharma, during the conference, his research works in deciphering the Harappan scripts were also consolidated by BR Mani additional director general, ASI. “These new researches can help a great deal in deciphering the Harappan script and once the script is deciphered a number of mysterious seals, square pieces, pottery, coins and other objects can be read and hence we can know about their trade, literature, art and other aspects of civilization,” informed Sharma.

Controversy of origin of Brahmi