Origin of human is not from Africa- Narmada Nensis

Out of Africa Theory of human origin is as Junked as Aryan theory of India– Indian Discovery Shoots Down False History of Human Origin. 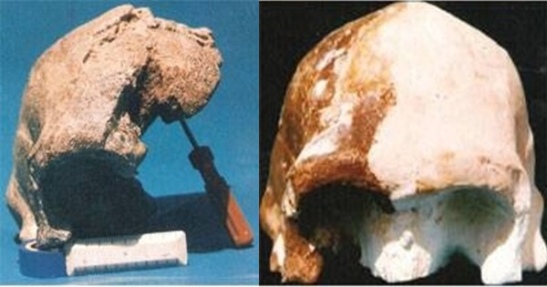 Britishers and Europeans of history of origin of mankind or history of evolution is junk and garbage as new evidence is coming up. They have almost succeeded to falsify Indian history. As you know that now westerners are also talking about false Jesus history as it was a myth.False Jesus history

Whenever we speak about our ancient common origin of Homo sapien dating back to thousands of years, we know only about Java Man and Peking Man, which we have read in our Science books. And we have grown up believing the Africa theory that our ancestors were from ‘LUCY’ of Africa! But we have read wrong! Have you heard about Narmada Human?

Narmada Nensis, the fossil skull of a man and when analysed in detail turned to be a woman found in the Narmada in Madhya Pradesh in 1982 proves our ancestors walked first in India and not Africa!!! The find was in the boulder conglomeration of the Narmada river, Indian geologist Arun Sonakia discovered the only known fossil of a human ancestor from South Asia. It was December 5, 1982. Place: Hathnora village in Sehore district, around 35 kilometres east of Hoshangabad in Madhya Pradesh. It proved the Africa theory wrong!

Working for the Geological Survey of India and known for his research on human tribal history, Arun Sonakia changed the very face of human origin studies in South Asia through this discovery. Termed Narmada Nensis, this fossil skull belongs to the ancestor category of Homo erectus, who preceded Homo sapiens. They colonized the earth from 1.8 million to 200,000 years ago. The most tantalising fossil discovery of a human ancestor!

The age of Narmada Nensis, according to Arun Sonakia is 500,000 to 600,000 years old. The fossil skull is not even a full skull. It is rather, a skull cap with a little bit of orbital roof. Dating of the skull is corroborated by animals found along with the fossil. Other factors that helped Sonakia determine the date are features of the fossil skull and palaeo-magnetic dating studies done at the Geological Survey of India.

The Africa theory of the origin of humans has been corroborated by stone tools along with human skeletons. In India, prehistoric stone tools were discovered across the length and breadth through excavations with no fossil evidence. And discovery of the fossil skull in Narmada changed the very concept of the origin of human ancestors. This discovery has put India on the world fossil map.

Narmada Nensis proved the presence of early humans in the Indian subcontinent. This scientific finding represents a human form that had colonised India at least 350,000~275,000 years ago. In the words of D K Bhattacharya, former head of anthropology department at University of Delhi – “Homo erectus had successfully adapted to savannah grasslands. They had domesticated fire, did group hunting and used stone tools”. According to him, one fossil can never tell the full story. He questions about having more fossils from India, which the government till now since independent India has not spent time and money for finding out the same. ASI and ICHR stand mute witness to government apathy which is more interested in knowing how and what Mughals did than anything else in history.

Presence of fossils depends on preservation conditions such as soil chemistry and erosion rates. In India, study of human origins, i.e. palaeontology, is in a neglected state. The government should implement measures to preserve the Stone Age sites and facilitate research via trained expertise. Probably, more fossils akin to Narmada Nensis are waiting to be discovered! More debunking of the Africa theory awaits. No wonder the history of human evolution will change with these discoveries!!

Featured image courtesy: Down To Earth.

Disclaimer: The views expressed here are solely of the author. My India My Glory does not assume any responsibility for the validity or information shared in this article by the author.

Leave a Reply to Sanatan Dharm and Hinduism Cancel reply